Find out more about us. We are Local. Born and bred.  The same family has owned this venue in Tweed Heads since 1974.

Find out more about us. Where we are and what we are about.

One of the great things about us is that we know Tweed Heads / Coolangatta, because we have lived here all our lives.  If there is anything you want to know, about bowling, or even about the town, just ask us.

Come in and see us any time. We pride ourselves in our reputation for friendly service.

Phone us to reserve your lane. Our friendly staff can answer any question you have.

During summer we operate on NSW daylight savings time. So if you are in Qld, add 1 hour.

Reserve a lane today by going to our easy online booking page.  You don’t need to make any payment, just enter the name and details of your group to book your lane.

The building’s construction started in 1963 on the site of the old Empire Theatre. Empire Lane next door is named after the theatre. The building is a custom designed, dedicated bowling centre by AMF Bowling Center Holdings (BCH) with Rock Maple timber lanes, manual scoring and the facility also featured AMF82-30 automatic pinsetters.

In 1974 Biggs & Sons Pty Ltd purchased the building which they intended to re-purpose into a furniture showroom / warehouse. However, they took the decision to keep it operating as Sunshine Bowl.  Don and Bob Biggs made a trip to Japan in the early 80’s to purchase the current AMF82-70 pinsetters.  These machines were imported and reconditioned before being put into service.  This proved to be such a success that it was repeated to create both Suncity Tenpin and Lismore Tenpin.

When a competing venue was opened in Burleigh Heads, it featured automatic scoring and thus the decision was made to investigate the possibility of manufacturing our own.  The resulting system is Computer Score which has grown to be the most commonly used scoring system in the country.  Computer Score also exports systems to the USA, New Zealand, Malaysia, South Africa and several other countries around the world.  It is currently in operation in over 400 bowling centres worldwide.

Following the growth of Computer Score, the bowling busines was leased to AusBowl from approx 1989 to 1996. However, Paul and Vanessa Biggs purchased the bowling business back in 1996 and renamed it to Coolangatta Tweed Tenpin. Paul is the second generation of the Biggs family to operate the bowl and has 40+ years in the tenpin bowling industry. 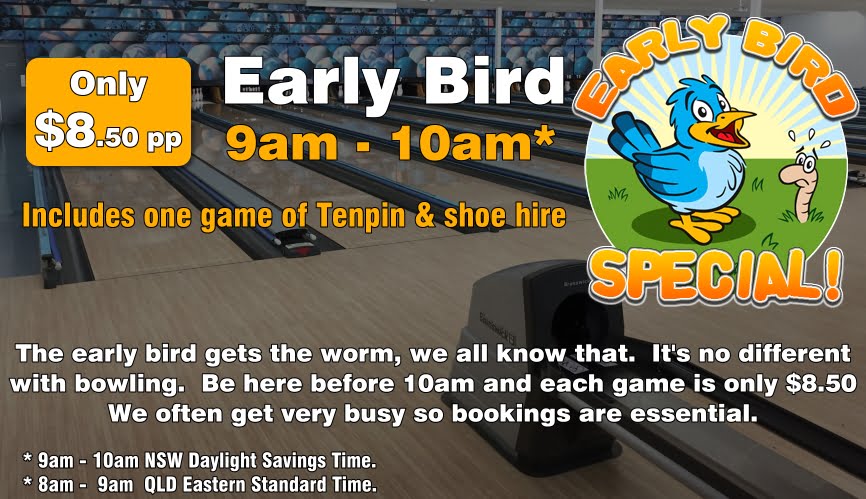 Whether you are young or old, a local or a visitor, Coolangatta Tweed Tenpin is your place for family entertainment.

Tomorrow is the last day to use your Dine and Discover vouchers. If you can’t get in for a game tomorrow give us a call or pop in and we will do you up a gift voucher to use when you are ready 🎳 ... See MoreSee Less
View on Facebook
· Share

Don’t forget to use your Dine & Discover vouchers! Only 22 days left to use them before they expire 🎳 ... See MoreSee Less

Just a shout out to the wonderful people we have w

What a huge weekend of bowling. We are so proud of

This weekend we welcome bowlers from all over Aust

Excited with a special delivery this week. Our new

Wishing everyone a safe and happy Easter 🐰

A little insight into owning a small business. I a

Mums and dads that homeschooled ~ keep an eye out

🎳 Under 23’s Tournament 🎳 Are you looking

Apologies but ‘rona is still kicking our behinds

Like every industry we are not immune to staff sho

We are currently operating the business with a ver

We are currently operating the business with a ver

Looking for some holiday fun…🎳